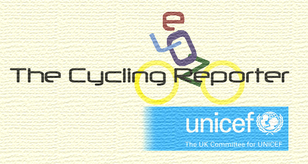 I first began cycle touring when I was 16, as a way to stave off boredom in the summer holidays from school. I include the tales below of my first two adventures mainly for self-indulgence, as they still conjure warm and happy memories of a time long past. 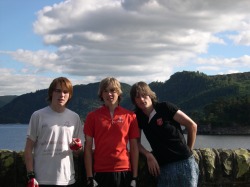 This corner-cutting expedition was the the conception of myself and two schoolmates, who, equally bored with the general summertime activities on offer,  decided to take a trip around the United Kingdom - the short way. I think we were 16. Starting from our homes in Northern Ireland, we cycled to the South, and took the ferry from Dublin to Holyhead in Wales. From there we headed across North Wales, into England and then north along the coast via such hotspots as Preston and Blackpool. The trip drew to a conclusion as we entered the Scottish border, resisted the urge to join all the young couples getting married at Gretna (you can marry at 17 there I think) and took another ferry from Stranraer back to Belfast.

This was my first real touring experience, and is definitely responsible for my current cycling vigour. At the time we three who undertook the trip were inspired by Long Way Round, and in an effort to replicate Ewan and Charley we decided to scale it down distance-wise and finance-wise. It wasn't quite the well-oiled and serious affair it might have been - I bought a bike a week before we left, and on our first training ride Alan and I cycled into each other on a main road and I ended up in a heap of bikes and panniers. The only real casualties however were my bell and my pride, and at least one of those could be replaced in the local bike shop. Alan kindly bought me a large, colourful bell in the shape of a cartoon lion's face. The lion was was obviously an optomist, with a smile the width of the bell, and to ring it you had to ping his tail - with that we were all set to take on the UK.

We ended up winging a lot of it, and arrived home safely via good luck more than judgement - particular highlights included being escorted off the motorway by police and my panniers falling off on the dual carriageway. What doesn't kill you makes you stronger though, and lessons were learnt that have hopefully embedded themselves into my brain. At very least I learnt you can't cycle on a UK motorway. I also experienced the almost inexplicable kindness of complete strangers for the first time, as respectable looking families welcomed three grotty teenagers on dodgy looking bikes into their homes for dinner. 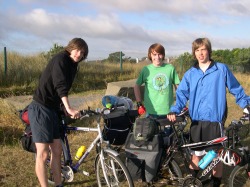 In fact, the whole adventure was such a success that upon our return we immediately began planning where to go next. Well, David and I did. Alan was a little less enthused on the prospect of a second outing. It turned out he didn't quite enjoy the tent sharing, shower skipping, rain soaked life on the road as much as we did. Never mind. He stayed in the UK the following summer as David and I embarked on the next stage - Short Way Round 2.

Cycling to the World Cup (Short Way Round 2) 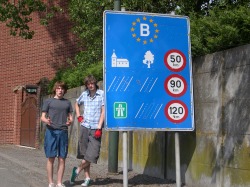 Fellow Short Way Round veteran David once again joined me as we set out from London to reach Dortmund, Germany in time to catch the quarter finals of World Cup 2006. That was the plan at least. This didn't quite come to fruition as we arrived in Belfast airport with our bikes on display to the world, flaunting EasyJet's "Bike must be contained within a box or a bag" rule. There was no conscious intent on our part to rebel against this ruling - merely a lack of planning. A trip to the local Halfords failed to yield the necessary packaging in time, and our flight departed happily without us.

Plan B was cobbled together in David's uncle's house, who lived within we've-had-a-disaster-and-need-your-internet-and-hospitality-quickly distance. A few short hours later and we were on the road to Rosslare in County Wexford, where we would board the ferry to Cherbourg. This would leave us 300 miles East of our planned entry point into France, but that was certainly a problem for another day. The ride in Ireland turned out to be a delight, save for Dave's first-day heatstroke. The ferry ride was less entertaining as we hadn't paid for a bunk, so resorted to trying to sleep on the moulded plastic seats below deck. I don't know what they had been moulded to, but it certainly wasn't a human. My broken sleep pattern gave me no rest, only a sore back and a dream where I met Kate Winslet on the bow. She told me about all the different boats she'd been on, and that the Titanic was more fun than this one, but a worse experience overall as it had sunk.

I acknowledged France upon entry with some groggy, swaying cycling. Three circuits of the town later and we made it out of Cherbourg. The following days in the country were superb - fantastic weather, terrible French accents (on our part), ridiculous amounts of cheese, and evenings filled with local beer, football on the telly, and wild camping in luxuriously flat fields. Belgium was much the same, with the beer tasting now becoming a lunchtime activity as well. The World Cup was well underway, and we were finding our cycling legs. The standout event of our time in Flanders was taking to the local pub of an evening, where we were greeted with initial distrust which soon gave way to pity and eventually kindliness. We were used to this - what was new this particular night was the sudden emergence of disco lights, whereupon the locals (all aged 50+) proceeded to hits the dance floor. The loudest, and drunkest (Monsieur Belly as we christened him) had a great time stripping off his shirt to some Belgian trance - I think his gyrating stomach will stay with me for many years to come. We left shortly after.

Holland was next, and true to form proved a cyclist's paradise. Flat routes, perfect surfaces, pretty girl's on bikes - it was definitely the place to be. The major problem was the language. The Dutch are, of course, master linguists, and everyone we spoke to conversed with us in perfect English. It had, however become quite a competition between Dave and I as to who could keep up a conversation in the local language the longest. Neither of us lasted more than 8 seconds in Holland, and that was only because Dave spent 8 seconds getting told off by a Dutch driver before he had to respond.

Finally we reached Germany, and football heaven. Our first night didn't bode well - we were uprooted from our chosen camping spot by the local farmer, who seemed very angry that we were in his field. He demanded we pack up and come with him. He was bigger than both of us combined, so we decided to agree with him that leaving was the best thing to do. He drove in front of us, slowly to make sure we didn't try to sneak off anywhere. After about half an hour, having left the village behind, we reached a shooting range sandwiched between two vast, empty fields. There wasn't a soul in sight. It had been a good trip, we thought, and it was shame it should end like this. But, finding ourselves on a shooting range with an angry German farmer at least 5 miles from the nearest house it had become quite clear we weren't going to survive. Except we did. After some angry pointing, furious arm-waving, and deeply incensed hand shaking, it turned out this kind landowner has decided we would be safer and more comfortable on this patch of his turf as opposed to our original choice. It must be said we still spend most of the night expecting to find him clambering into our tent clutching a gun, but instead the morning brought no murder - just 2 litres of water and a huge fresh bag of cherries from his wife. 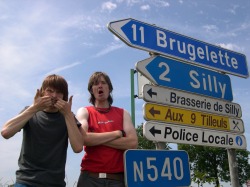 Delighted to be alive and with a new lust for life we headed for Dortmund. Unfortunately we had no money to actually get into a stadium for a match, but we did enjoy watching the games on the huge screens in the fan's square. Flying back a few days from Dusseldorf was a much more pleasant experience than trying to depart from Belfast, partly due to our efforts at getting a bike box from the local shop, but equally because the people at AirBerlin were very nice indeed. We returned home heroes (in our eyes) and still enthused about the whole cycling thing. Heading towards a defined goal definitely pushed us harder than we probably would have ourselves, but undoubtedly made it more rewarding when we got there. The trip was far from hardcore - we certainly didn't break any speed records along the way. That's not to say we didn't take any risks - trying some 'stroop' in Belgium was a chance I wouldn't take again. I think we did thrive being outside our comfort zone though, and the memories of this ride keep me going during those times when I lose all motivation for my current venture.
UA-46040960-1